Nancy Biska was honored at the fifth annual Evening of Greek Culture and Cuisine sponsored by the Modern Greek Language and Literature program at St. John’s University on Friday evening, October 12 in Council Hall. More than 200 persons attended.

Biska is a journalist and editor for Greek and international newspapers and magazines. She is a public relations spokesperson, radio and television personality and Webmaster. Seirios Media and P.R. Publications, created by Biska, is a leading Modern Greek Internet newspaper. Her support of Hellenism and the Modern Greek Language and Literature program at St. John’s University is legendary.

The journalist has mainstreamed the Modern Greek Language into American society. She is a role model for young women in her independence and support of righteous causes. Biska has extraordinarily broad and deep experience in Greek and Greek American broadcast journalism and the print media, with outstanding credentials in all facets of creating, producing and directing historical and cultural programming, special documentaries and news programs. Her academic credentials include a Bachelor of Arts degree in Political Science from the University of Athens and a Master’s degree in Communications from City University of London, with significant research credits and publications.

Since 2002, Biska has served as media and public relations chairperson for various Hellenic American organizations promoting Hellenic ideals, language, history and cultural heritage. She was the first to inform the Hellenic American community about the opportunity to open Greek-American charter schools for the perpetuation of the Hellenic paideia in the United States.

The journalist has organized on behalf of the Hellenic American National Council four pan-American and regional symposiums on Hellenic education, the first international symposium being, “Reviving the Delphic Idea” with the theme “Know Thyself”, in Delphi. She is the PR person for the Federation of Hellenic Educators and Cultural Associations. 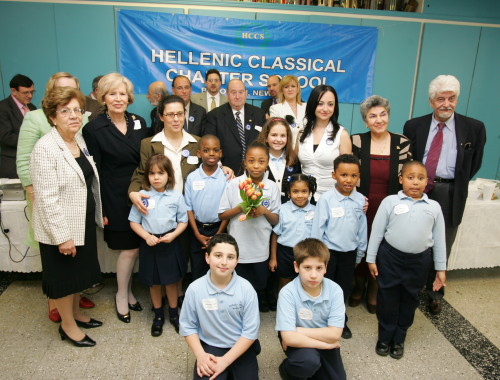