“Greek News”, October 22nd, 2007
New York.- A devastating Iraq War, declining economy, fire ravaged Greece is inspiring a return to oneʼs roots. The Fourth Annual Evening of Greek Culture and Cuisine at St. Johnʼs University in Council Hall on Friday, October 12th had standing room only. The Panchiaki Korais Society Dance Group under the supervision of Evangelia Klidas and Katie Markidis mesmerized an audience of 200 persons with a program of dances that exemplified the best of Greece.

“Each costume was made in Greece for $500 a piece,” said Evangelia Klidas, coordinator of the dance group for thirty years. Scholarships, awards to Benefactor and students and Greek cuisine was offered free through the generosity of the SJU Greek Club; Pan Macedonian Studies Center; Panchiaki Korais Society; Geros Tou Morea NY Chapter #1 of the Pan Arcadian Federation of America; businesses and Greek-American families.

Dr. Nicholas Toscano, Chairman of the Languages and Literatures Department of St. Johnʼs University, has supported the growth of the study of Modern Greek Language. Currently, four Modern Greek language classes are offered each semester. The Programʼs enrollment is forty five students. Twenty-five percent are non-native speakers. Prof. Catherine Tsounis and Dr. John G. Siolas are adjunct instructors of a Program that grew from 18 students in 1997 to its present enrollment in 2007. The scholarship program for excellence in the Modern Greek Language was inspired by Archon Megas Hartophylax Stephen Cherpelis in 2000. Evytanon Amerikis “To Karpenisi” Sociery and Panchiaki Korais Society, through the help of Mr. and Mrs.Nick Fridas, supported this first effort. In 2007, $83,000 in scholarships has been directly given to native and non-native speaking students directly. All administrative costs have been covered by Prof. Catherine Tsounis and Dr. John G. Siolas.

The opening prayer was performed by Rev. Anastasios Diakovasilis. Opening remarks were delivered by Elias Neofytides, President of the PanMacedonian Studies Center. Keynote speaker was New York State Senator Frank Padavan. Inspector Scott Hanover and Lt. Daniel Heffernan of the 111th Precinct described their efforts to provide the highest quality of life to all members of the Greek-American community and Northeastern Queens.

Small states such as Cyprus can seek justice and protection against the use of force only through the pre-eminence of international law. Pan Cyprian Association of America president Philip Christopher believes “the U.S. will use its abilities as a superpower to promote human rights, freedom and democracy wherever it can.” The 2007 Pan Cyprian of America scholarships is awarded to two outstanding Cyprian students who have achieved excellence in the Modern Greek Language and Literature Program. They are Veronica Georgiades and Christian Pashiou.

Rev. Anastasios Diakovasilis is an outstanding Modern Greek poet and Greek Orthodox priest. He has inspired generations of Greek Americans through his religious ministry at St. Nicholas Greek Orthodox Church in Flushing. He is the author of numerous books. His humility, kindness and willingness to help all are unique in our age of materialism. The students of the Modern Greek Language and Literature Program enjoy his poems on events in Modern Greece and Cyprus and America. An award for outstanding contribution to the study of the Modern Greek Language was presented to Rev. Diakovasilis.

Phil-Hellenes have assisted unconnected, hardworking, intelligent persons of Greek origins for generations. Senator Frank Padavan, a Republican, whose popularity crosses all political parties, has been in power for several decades. His popularity lies in his fairness, humility and kindness to all who seek his help, without any strings He is the only Republican representative in the Democratic stronghold of northeastern Queens, New York City. His assistance to the Greek-American communities in his district is legendary. He helps with a smile. Senator Frank Padavan is responsible for obtaining the 2007 New York State Education grant that published The Greek American Experience book by Prof. Catherine Tsounis through the auspices of the Pan Macedonian Studies Center. This book is read in the United States and the European Union made possible by Senator Padavanʼs unique cooperation with the Pan Macedonian Studies Center. An award of appreciation was presented to Senator Padavan.

Archon Dikaiophylax of the Order of. St. Andrew the Apostle, Founder of St. Nicholas Greek Orthodox Church and the Stephen and Arete Cherpelis Greek Afternoon School in Flushing, New York, Philanthropist, Defender of the Patriarchate in Constantinople, businessman, Benefactor of the Ethnos (people) are all his titles. He encouraged the beginning of the Modern Greek Scholarship program by donating $1500 in 2000. He has continued donating a $500 scholarship every year anonymously. He is a man who follows a righteous path, often walking alone in the face of adversity. Mr. Stephen Cherpelis was honored for his continued support. He astonished a packed audience with a donation for a $500 scholarship for the stude of the Modern Greek language. A $500 scholarship was granted to Prof. Catherine Tsounis for the Publishing of her second book in the series “The Greek-American Experience”.

The following honoree is a leading international journalist and editor for leading Greek national and international newspapers and magazines, public relations spokesperson, radio and television personality and webmaster. Seirios Media and P.R. Publications is a leading Modern Greek internet newspaper. Her support of Hellenism and the Modern Greek Language and Literature Program is legendary. She has mainstreamed the Modern Greek Language into American society. She is a role model for young women in your independence and support of righteous causes. Mrs. Nancy Biska was honored for her accomplishments. She pledged to return in Ootober 2008 with a scholarship to an outstanding scholar.

The next award recipient was a graduate of the Modern Greek Language and Literature Program. She has made her mark on SJU college life as being the first Greek-American Assistant Dean in St. Johnʼs College. She is the recipient of the Greek Homeowners and Athanasiades Foundation scholarships for excellence in Modern Greek. Awards were presented to Diamanto Ktenas and Irene Zouroudis.Their dynamic personalities transformed the Greek Club into a powerhouse on St. Johnʼs University campus. Ms. Ktenas worked behind the scenes promoting the Fourth Evening of Greek Culture. Our Foreign Language laboratory is in need of Modern Greek DVDʼs. An appreciation award was presented to Vice-President Kostas Lambiris of the Pan Macedonian Studies Center for his exciting DVDʼs.

«The Greeks will have a word for it»… 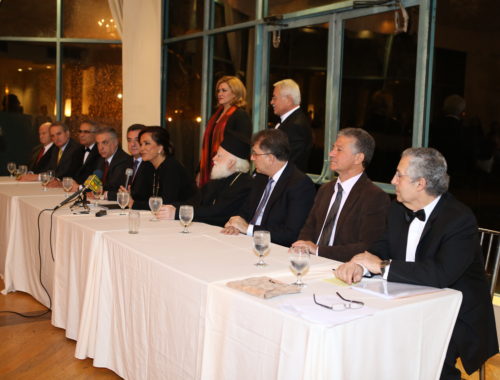