What do the New York State Senator, Mike Giannaris, New York Reps, Aravela Simota and Nicole Malliotaki, Judge Peter Georgalos, senior New York Times member, George Kalogerakis and other prominent Greek – American scientists, businessmen and artists have in common? All of them have taken Greek language lessons in Greek schools, during their student years; something they have not forgotten, honoring their teachers until today.

In this year’s event, organized by the Pan-American Hellenic Federation of Teachers and Greek Teachers Association “Prometheus”, which completes 35 years since its establishment, they were given the opportunity to thank the people who initiated them to the beauty of our language. And their teachers, honored them, feeling proud.

The keynote speaker of the event, according to the National Herald, was Dr. Rodamanthos Kokolis, who stressed – among other things – that “As Greeks, we can achieve anything, through the mind and soul”. The President of the Pan-American Hellenic Federation of Teachers, Stella Kokolis, and Prometheus President, Vassiliki Filioti, referred to the role of Greek Diaspora teachers.

During the event, an honorary award was also presented to the Education Coordinator of the Consulate General of New York, George Vlikidis, who is retiring and returning to Greece this summer. Evidently moved, Mr. Vlikidis thanked all the Greek – American teachers and teachers appointed from Greece, for their excellent cooperation all these years. He also expressed his certainty that Greek – American teachers will continue their “difficult and challenging’ work, with the same zeal.

Mr. Vlikidis was presented by the Archdiocese Director of Greek Education, Dr. Ioannis Efthymiopoulos, who underlined that “today teachers are proud of their old students”.

A highlight of the evening was when students of St. Demetrios Day School,, performed the national anthems with their violins, and other famous melodies, who were applauded by the overwhelmed audience.

The event was presented by Nancy Biska. 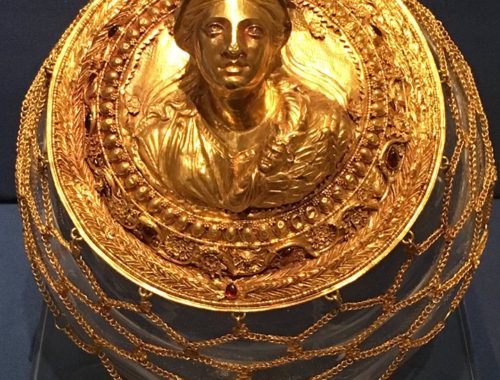 Goddess Athena at the Met