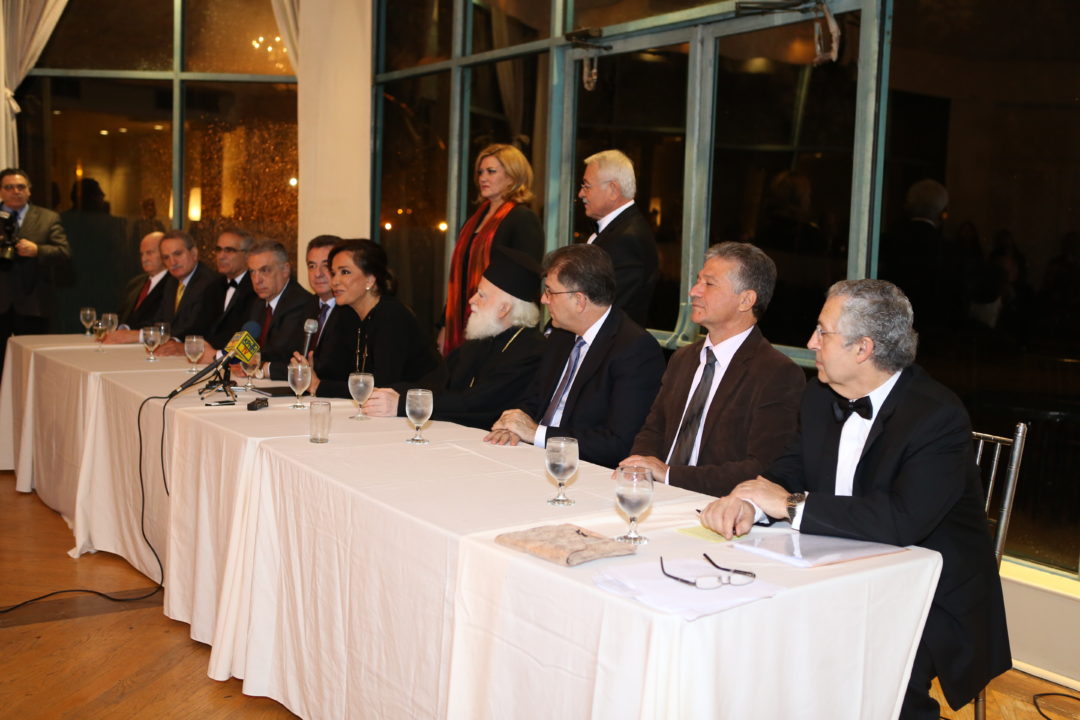 The New Democracy Minister and head of the Greek delegation to the Parliamentary Assembly of the Council of Europe, Dora Bakoyannis, and preeminent author Harry Mark Petrakis will be the recipients of the highest awards of the Pancretan Association of America, the Venizelos and the Kazantzakis awards respectively, during the Centennial Awards Gala to be held in the evening of December 6, 2013, at the «Terrace on the Park», in Flushing Meadow Park in Queens, N.Y. There will also be two additional cultural events in the early evening of December 7, 2013, at the Cretan House in Astoria: A theatre play “Dialogues and Reflections during the Union Era – Historical overview of the events that led to the Union” and a musical event, a composition dedicated to the Union by an Orchestra of 12 young Cretan-American musicians headed by Lyra-player Christos Fasarakis.

On Sunday, December 8, 2013, a Memorial service will be dedicated to the heroes of the Cretan Struggle for the Union and Doxology and Artoklasia officiated by Archbishop Demetrios at the Cathedral of Holy Trinity in Manhattan. The Centennial celebrations will conclude on Sunday afternoon with a wreath-laying ceremony at the South Ferry terminal in Manhattan, which will be received by the U.S. Coastguard and transferred to the Statue of Liberty in New York Harbor, as a small token of our appreciation to all those who sacrificed their lives for that illusive liberty, which many of our ancestors never lived to enjoy.

Awards Gala
The selection of the awards recipients are made by the Board of Directors of the Pancretan Association of America where suggestions are submitted by members of the organization and representatives of the chapters. The Venizelos award is bestowed to those who have contributed and excelled in the fields of government, politics and diplomacy. The Kazantzakis award is bestowed to personalities who have contributed and excelled in the letters, arts, literature and academia.

The official event of the awards gala serves the purpose to inform the broader American public as well as younger generations of Greek Americans of the history and achievements of the Pancretan Association of America and its members. Dora Bakoyannis Dora Bakoyannis was elected as Athens’ first female mayor in the city’s 3,500-year history. As mayor, she was heavily involved in the preparation of the 2004 Athens Olympic Games, was the first woman to serve as mayor of a city hosting the Olympic Games, and she passed the Olympic flag to the mayor of Beijing, Wang Qishan. Bakoyannis received the honor of being elected World Mayor in 2005, an annual internet-based project organized by City Mayors in order to honor the mayors who have served their communities well. On February 15, 2006, she became Minister of Foreign Affairs of Greece and thus the highest-ranking woman in the history of the Cabinet of Greece.

Mrs. Bakoyannis made proud the Cretans worldwide by being continuously included in Forbes Magazine’s List of The World’s 100 Most Powerful Women from 2006 to 2008. In 2008, she was awarded the Emperor Maximilian Award-European Award for Regional Policy and Local Government by the State of Tyrol and the city of Innsbruck. In 2009, she was named as the first female foreign associate of the French Academy in Humanities and Political Sciences (Académie Française des Sciences Morales et Politiques). The same year, she was also awarded the title of Honorary Senator by the European Academy of Human and Political Sciences in Salzburg. In 2010, Dora Bakoyannis was awarded the National Order of the Chivalry of the Legion of Honor of the French Republic (Ordre Nationale de Chevalier de la Legion d’ Honneur). In January 2013, she was awarded an Honorary Doctor of the European University in Bulgaria, for her contribution to European progress made by Bulgaria and Southeast Europe.

Brief Biography
Dora Bakoyannis comes from a prominent Cretan family with outstanding tradition in the country’s politics. She is the daughter of former Prime Minister of Greece Constantine and Marika Mitsotakis. In December 1974, she was married to journalist Pavlos Bakoyannis and later gave birth to their two children, Alexia and Kostas. She has four grandchildren. She studied political science and communication at the Ludwig Maximilian University of Munich. After the collapse of the junta, she returned to Greece and continued her academic studies in public law at the National and Kapodistrian University of Athens. In addition to Greek, Bakoyannis is fluent in English, French and German.

In October 1990, she served as a Parliamentary Under-Secretary of State in the Mitsotakis government and, in December 1992, she was appointed Minister for Culture in the government of New Democracy. In September 1996, April 2000, September 2007 and October 2009, she was elected Member of Parliament for the New Democracy party in Athens’s 1st electoral district, coming first in votes. In October 2002, Mrs. Bakoyannis was elected as Athens’s first female mayor, winning by a majority of 60.6%, greater than any Athens mayor in history.

In February 2006, she was appointed Minister of Foreign Affairs of Greece in the government Karamanlis, a position that she held until October 2009. In November 2010, she led a citizens’ initiative that founded the political movement of the Democratic Alliance. In May 2012, she was a member of the Greek Parliament after the coalition of Democratic Alliance with New Democracy based on a focused memorandum of understanding between the two parties, concerning the structural reforms needed to keep Greece in the Eurozone. In the elections on June 17, 2012, Dora Bakoyannis lead the At-Large ballot of New Democracy. Mrs. Bakoyannis was and always is a friend and staunch supporter the Pancretan Association of America.

Hary Mark Petrakis
In 1923, Charalambos Petrakis was born in St. Louis. He is the most important Greek-American writer of his generation. Mr. Petrakis has published ten books, six novels, three collections of short stories, and an autobiography. He was twice nominated for the National Book Award in the United States and won the Friends of American Writers Award, Friends of Literature Award, Society of Midlands Authors Award and O ‘Henry Award. He was recently honored with the Film Hellene Honorary Award 2013 for the film “A Dream of Kings”. The movie was based on his novel, “A Dream of Kings, which is a New York Times bestseller. The theme of the book is the story of a Greek man from Chicago, a loving, but not faithful husband and father, who learns that his son is dying. Part of the film, which stars Anthony Quinn and Irene Papas, is shot on Halsted Street in Greektown Chicago. Harry Mark Petrakis Photo Courtesy Mark Petrakis He also taught at several American universities and received many honorary doctorates.

BRIEF BIOGRAPHY
In 1916, the father of Harry Mark Petrakis, the Rev. Mark Petrakis, left the island of Crete with his wife Stella and their four children to offer his services to a crowded community of Cretan miners in the town of Price, Utah. The young Cretans had come to America through an interstate agreement for apprenticeship in the mines of Utah. The work in the mines at the time was very tough and many lost their lives in accidents. The Cretan miners had built a church but had no priest and wrote to the Archbishop of Crete asking him to send them a priest, provided, he have a family as they immigrated to America completely alone, without mothers, sisters, or wives.

His family came by boat to New York and traveled by train to Salt Lake City. From there, a car drove the Petrakis family to their final destination, the city of Price, Utah. The scene that played out in Salt Lake City was something out of a western: the parents of Harry Petrakis were welcomed by more than 1000 Cretan miners, who were waiting at the train station. When the Petrakis family arrived, the Cretan miners pulled out their pistols from their belts and started shooting in the air to celebrate the arrival of the priest. His mother thought they were in a war zone and was terrified. But when Harry’s mother descended from the train along with his two sisters, dressed all three in white lace dresses, a sudden silence spread quickly among the gathered men.

Excited and filled with emotion, the men began crying and making their cross while some kissed the fringe of the dress of his mother as she passed between them. A photo of 2.5 meters high, reflecting the arrival of his family in America, is one of the permanent exhibits at the American Museum of Immigration at Ellis Island in New York. Harry was the fifth of six children. His father served the parish of Sts. Constantine and Helen on Chicago’s South Side until his death in 1951. At the age of 11, Harry contracted tuberculosis, which kept him bedridden for two years. He passed his time reading avidly whatever he could find – usually a book every few days.

When he had recovered, he continued his reading in the neighborhood library. He ended his formal education while still in high school while holding a series of jobs, including working in the steel mills and on the railways express baggage platform. When he was 22, he married Diane Perparos, whom he had known since grammar school. They have three sons and four grandchildren. In his work, Petrakis examines the plight of the Greek immigrants as they search for the American dream. He knew from his father the conditions of the Greek coalminers in Utah, where Father

Mark Petrakis had first been assigned when he arrived from Crete. He knew first-hand the confrontations with blacks in the Depression years as they migrated from the Jim Crow south to Chicago. He knew the gangsters, the gamblers, he himself being addicted for a while, and the lonely, burnt out old men. He knew the Greek restaurants, the Greek sweet shops, the Greek floral shops. His realism sometimes bothered other Greeks who felt he was often defining an unflattering Greek-American portrait.

In 1970, when he was not yet 50, Petrakis published his frank autobiography, “Stelmark: A Family Recollection,” where the roots of most of his literary work can be discerned in family memoirs of ancestral Crete and his own personal experiences in Midwestern America